I recently noted an article about how the American Dream has downsized.  The decline of our society as “aspirational” is one of the biggest shifts in attitude that has taken place in my lifetime, and is one I have noted on many occasions.  But in the middle of the article, a survey was taken with a striking result:

Signs show that hard times have also prompted Americans to reevaluate what they want out of life. Not, perhaps, at first glance. Participants in focus groups convened by the Pew Economic Mobility Project are asked to draw a picture of the American Dream. Nearly everyone’s sketch is the same—two adults, some kids, and a dog in front of a house with a fence. (Even cat owners end up drawing a dog.) It is the set of Leave It to Beaver, sans canine, unchanged since the 1950s.

Let’s face the first fact: when the cat owners consider a dog as part of ideal life, something is bad wrong.  Right, guys?

Moving on to another point, there is the business about these creatures in front of the house with a fence.  For me, that’s where the real head scratching started.  Maybe I’ve lived in the Old Confederacy too long, but at least since I first came to the land of kudzu I have never lived in a house with a fence in the front, and where I live now (Tennessee) most houses I pass by don’t have one either.

Fences can appear on the front (or fronts, with a corner lot), the sides of the house or the back.  (I’m leaving out large, semi-agricultural size plots: for the true Southerner, that IS the American Dream).  Fences in the front(s) are not the norm in the South.  One generally sees house after house with an open view.  On the back, there is generally a barrier, but that can range from a chain link fence to hedges to whatever.  The sides can go either way; very typically property lines are demarcated only by a change in grass height reflecting the mower settings of the different owners (assuming, of course, that the grass is being mowed…)

For my family, even before we moved to the South, it’s been a hit or miss proposition.  At the right the house in Chicago my great-great grandparents lived and raised their children.  The photo dates from 1904 and, yes, the iron fence is along the front and sides, with another wooden one blocking the back yard.  Although iron fences aren’t uncommon, wooden fences seem to be more “classically” American, and a picture of the house during the Civil War shows both wooden fences and sidewalk.  However, my ancestors did own the, er, iron works.  (Important note: further south, wooden fences may be the American ideal, but they’re a disaster waiting to happen; in the hot climate, they tend to rot more quickly). 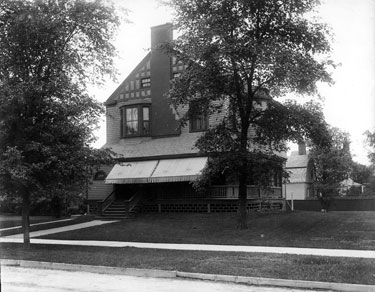 My great-grandfather certainly enjoyed the American Dream before it was defined as such, but his Buena Park house (right) dispensed with the fence along the street front, although it was another story with the neighbours.  The house had another feature that’s generally associated with either Southerners or distributionists: the front porch.  But here it was in Chicago.

Skipping a couple of generations, our house in Palm Beach dispensed with the fence (visible at right) in another way: hedges, as shown on the right.  Palm Beach is, IMHO, at the acme of the American Dream, and yet is unAmerican in profound ways, and the hedges all around the property are a typical feature in Palm Beach.  Today they’re generally higher, designed to completely obstruct the view of the house from the street.  Laurence Leamer described Palm Beach as a closed society; the walls of hedges symbolise that.  (The subdivision I live in now actually prohibits hedges or fences at the front of the property, and this, trust me, is no Palm Beach).

There’s one place where a fence is still de rigeur: around a swimming pool.  Although I think that this is a good safety measure, it’s also the result of another powerful force in our society with mixed results: a very aggressive plaintiff’s bar.

I think that the idealisation of the (preferably wooden Pickett) fence is something we came to know and love in the part of the country where the American Dream really took root: the North, and especially the Midwest.  As we’ve dispersed South and West, how that dream looks has changed in reality, but not necessarily in our ideals.

This eccentric treatment of fences and the American Dream isn’t meant to make fun of it.  Irrespective of what you think of nouveaux riches, the erosion of people’s aspirations for a better life–no matter how they define it–is not a pleasant process to see and even less of one to experience.  And things don’t look to get better.  Our governing elites, after The Trip to Europe, have their own dream for us: living in the 50 square metre apartment and becoming straphangers on the tube, to use G.K. Chesterton’s phrase.  Under those circumstance, we’ll not only lose the fence, we’ll lose the yard too.