The incoming administration is doing many things that put their opponents–and some of their supporters–in a lather.  That’s not hard to do these days in the US, it seems that everyone pretty much lives that way.  One of those is with the Chinese–taking a call from Taiwan’s president, his threats regarding trade, etc.

I have a little commercial experience with the Chinese, albeit a long time ago.  Here are my thoughts on the subject:

Much of the Advice People Give on China is Rubbish

At the end of my series on the subject, I state the following:

One of the lessons we at Vulcan took from China is that “experts” seem to gravitate towards the country. We found these experts in the U.S., too. They’d appear at international trade events, going on at length about how to deal with this exotic Chinese culture and how different it was from ours, and how with their advice we would do business.

The problem with many of these people is that they’ve never “done the deal.” Many of them have never sold or leased anything to the Chinese or anyone else for that matter. We found that such advice not to be as helpful as it looked. However, the one thing that those of us who have done the deal must avoid is to represent our specific experience as the only way to do business in China, then or now. But there are some useful lessons that can be learned.

Anyone who speaks of “doing the deal” must have Donald Trump in the back of their minds, and I must confess I did when writing that back in 2007.  But a lot of the whining about how he’s about to ruin our relationship is rubbish.  It’s on par with those who never thought China would get anywhere without “democratic” institutions.  Many of those people are crying about the result of our own democratic institution, so they shouldn’t complain.  (If you don’t like our result, you should first consider this before you tout another “band-aid” solution.)

The Chinese are Superb Negotiators

In the first contact with our Chinese representative, he advised the following:

The Chinese are not frivolous. They will not invite you unless they plan to buy…The Chinese are good bargainers. It is wise to add 5% to gracefully give away in contract discussions as a discount.

Many things Donald Trump says are characterised as “promises,” especially on immigration.  They are in fact first negotiating positions, and the Chinese will see them as such.  The fact that Americans don’t only shows what poor negotiators we are.  I wouldn’t panic about his initial statements about anything, and those about the Chinese are no exception.

He Needs to be Careful on Taiwan

I noted the following about Taiwan:

The Americans were in a more difficult situation, mostly because of the Cold War. In addition to the export restrictions and complete lack of government support, there was always the matter of Taiwan, which sticks in the Chinese government’s craw just about worse than anything else (although the commercial activities of “Overseas Chinese” such as those from Taiwan and elsewhere also helped to re-open China for business.)

It’s still true that Taiwan is a sore subject for those on the Mainland, because it goes to national identity.  Which China is the real one?  The Communist one on the Mainland or the Guomindang one on Taiwan?  Both our relationship and theirs with Taiwan is complex, because they are an important trading partner with the US, and in fact one for the Mainland as well.

It wasn’t a mistake for him to speak with Taiwan’s President.  For him, it’s part of the negotiating process.  But he needs to be careful on this issue.

The Chinese Can’t Afford to See Us Fold

One thing that people say is that the Chinese can punish us severely through cyber assault, calling debt, etc.  But as I pointed out here:

Let’s consider our situation with the Chinese.  Back in the last decade, when we were borrowing so much and importing the stuff they made, people would say that they’re going to “call the note” and take us over.  That idea was ridiculous because a) their trading partner would hit the wall, crashing their exports and b) it would take the main reserve currency with it.  Both of these would make repayment of the debt impossible.  Currently the Chinese are using their new-found financial power to expand themselves throughout the world.

But there’s another thing to consider, one that is more important now than before: if they do crash the place,  who’ll pick up the pieces?  The world has become a more prosperous place overall; our shrinking part of the world pie is not only because we are less prosperous, but because others are more.

China will take a greater place in world affairs as time progresses.  But in the meanwhile they cannot afford to see us fold.  Both sides have been dealt a hand; it is important that neither tries to overplay it.

Chinese Expansionism is Their Response to American Weakness

Many wonder “what will Trump do with the Chinese islands in the South China Sea.”  The answer is probably “not much.”  They have done this because they rightfully perceived American weakness, done by a President who basically felt that American power was injurious to the state of the world.  The first thing that Trump will find out, to expand the card analogy, is that the hand he’s been dealt is not as strong as his predecessors. Much of his task to “make America great again” is to first make America itself great and then let the rest of the world size itself up.  This is as opposed to the neocon approach of beating down any challenges that come along through military action.  If he sticks with this he will play to the traditional strengths of the country.

Donald Trump has frightened many.  But, like Barack Obama, electing him was a risk.  That reminds me of a rather humorous incident earlier this year:

One of the more amusing moments I’ve had here at UTC has been the visit of the new Dean of the College of Engineering and Computer Science, Dr. Daniel Pack, to the SimCentre, where I just finished my PhD.  He wanted to meet with the students; it’s been a rough road for the program, and he wanted to “cast a vision” for the future.  Towards the end of his talk, he threw out the old B-school meme that, in Chinese, the character for “opportunity” is contained in the character for “crisis.”

However, as is the case with most gatherings of engineering students (and faculty) these days, the Chinese are well represented.  Once he said that he paused in puzzlement for a second, looked at the Chinese and asked, “Is that really true?”  The Chinese, after looking at each other, confirmed that it was true.  Needless to say, the Dean sighed with relief.

Liberals want a world which is free of uncertainty.  So does everyone else, but that isn’t what we have.  Letting things slide down has its own risks.

Recently I visited an art gallery where Jean-Paul Laurens’ portrait of the Roman Emperor Honorius was on display. 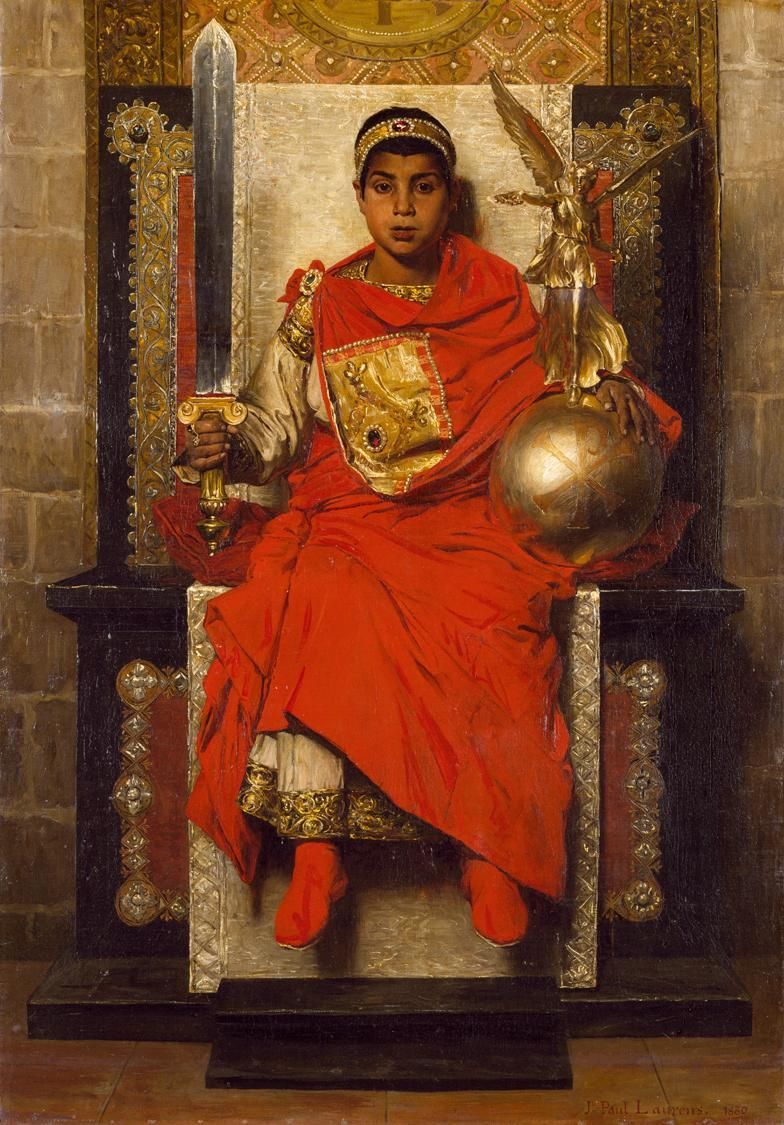 He became Emperor at the age of ten.  The portrait conveys the message that the job was too big for him.  The sword and orb certainly are, and his feet don’t reach the floor.  His growing up didn’t help; Honorius’ reign was a disaster.  He had his most capable general Stilicho executed, and it was downhill from there, starting with the first sack of Rome in 410.  With that Britain separated itself from Roman rule and the Western Empire began its march to the end.

The United States of American isn’t a perpetual motion machine.  The arc of history may be continuous but it is not everywhere smooth or differentiable.  To keep things up we need to take chances now and then.  When we sat down with the Chinese we didn’t know what the outcome would be, just as Richard Nixon didn’t know when he started his initiative.  But the results were and are beneficial.

Whether this chance will work with China or anywhere else remains to be seen, but it must be tried.